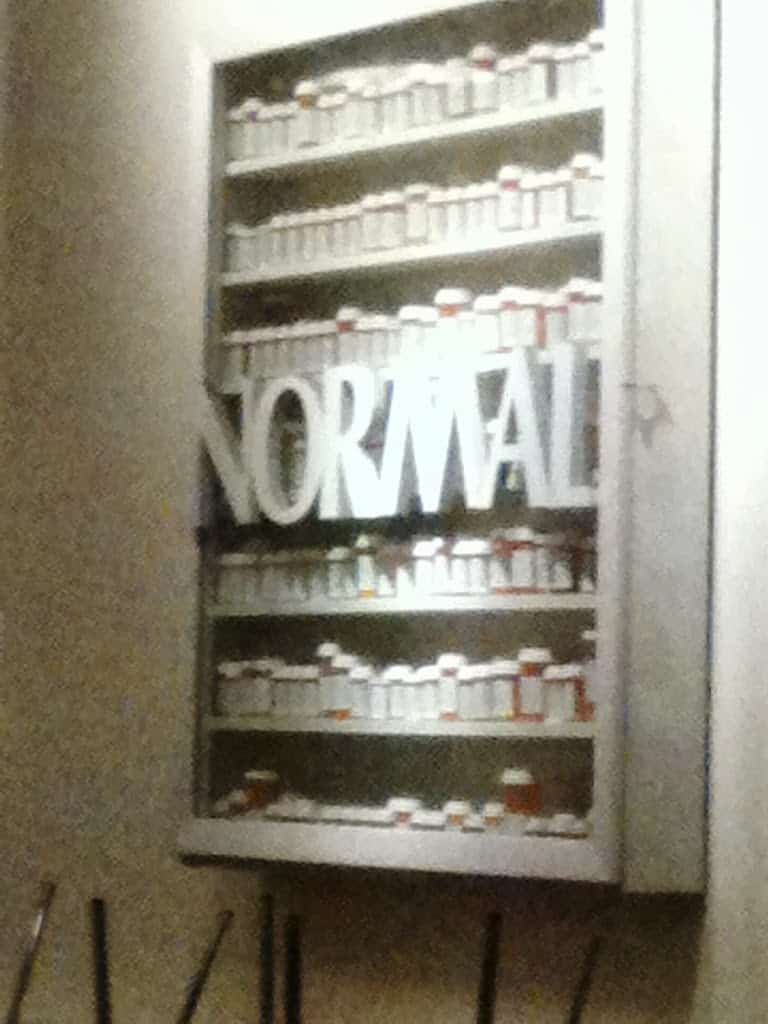 One night coming back from a Board Meeting of a nonprofit in the Castro I snapped this photo through the window of the Duboce Cafe. Normal. All those bottles of pills behind the glass, which over a year cost more than a new BMW, that is the price of normal for someone with HIV.

I thought about using this photo last year when Anthem Blue Cross announced that it was requiring all HIV / AIDS patients they insure to obtain their drugs through a mandatory Mail Order program. Buy from one supplier, get the maximum price discount, make sure the prescription never runs out. Seemed like a good idea when it was thought up in a cost containment meeting. But, before I could Blog away Anthem allowed for an opt out for it’s insureds and life returned back to “normal”.

In our country there are 1.1 million people, just slightly less than the population of Dallas, with HIV. Many of these people do not get regular care, get medicine, have regular access to doctors. The Affordable Care Act and Medicaid expansion is supposed to close this gap. Not every state opted to expand Medicaid, removing the requirement of total disability to qualify for benefits. For an HIV patient, total disability means waiting until the illness progresses to AIDS. Not a good option.

The Affordable Care Act mandates a certain level of benefits. Now every insurer can only offer four Metallic Plan choices (think Henry Ford and black cars). The only cost containment options are to limit the network of Doctors and Hospitals and the Prescription Drug choices. In order to protect themselves from the high cost of these drugs, insurers limited drug choices and assigned high Co-Pay’s for the treatment of HIV /AIDS.

Drug companies have been able to combine multiple HIV / AIDS drugs into a single tablet under the thought that it’s easier to remember to take a single pill. A one month supply runs over $2,000 (Stribild, Atripla, Complera), far above the premium the insurer will be able to charge. Multiply this over many, many newly insured HIV / AIDS patients and you get the picture. Antacid dispenser in the Actuaries lounge.

Which brings me to the news this week when Blue Cross and Blue Shield of Louisiana announced it would reject checks from a Federal Program (known as the Ryan White HIV AIDS Program) designed to pay premiums for HIV /AIDS patients to enroll in the Affordable Care Act. The concern they have stems from statements from the Centers for Medicare and Medicaid Services (CMS) that it had significant concerns about this, citing the risk of fraud.

AIDS advocates in Louisiana “were enrolling anyone and everyone” in the state exchange. The folks at Blue Cross and Blue Shield no doubt are pretty nervous about all of this and the CMS provided them a four lane highway to escape the potential of huge adverse selection (think stacked deck). The CMS is now doing a massive back pedal to cover it’s rear end and allow these checks to be used.

Maybe it was just wishful thinking by the artist, there is no true “Normal” for someone diagnosed with HIV /AIDS.